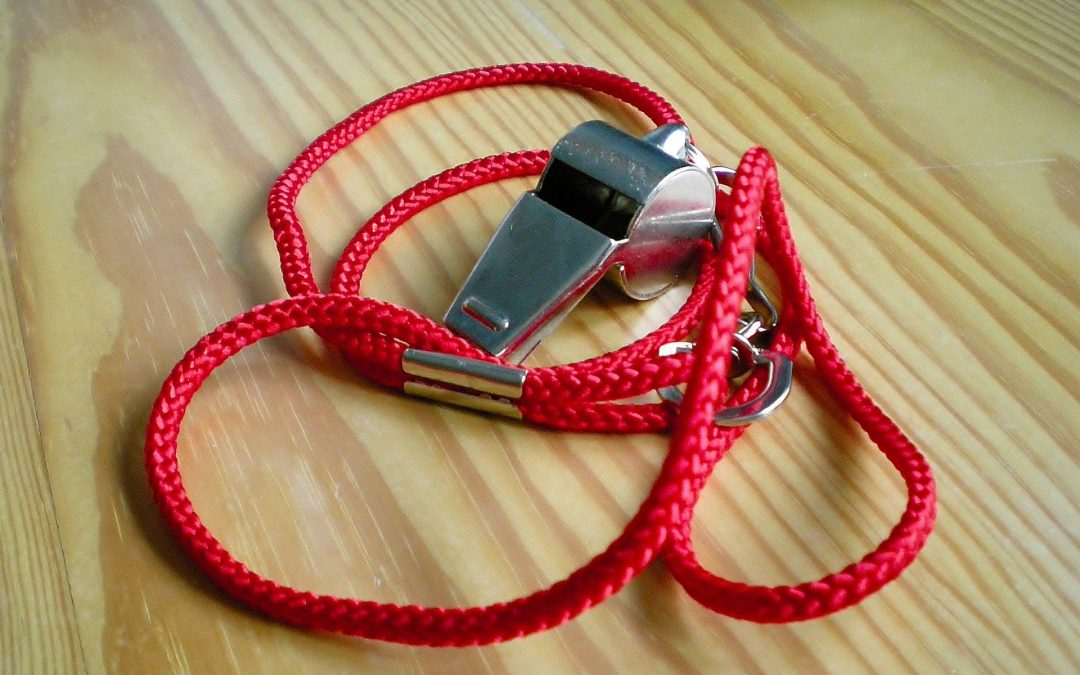 What is a whistle blower?

You’re a whistleblower if you’re a worker and you report certain types of wrongdoing, which will usually be something you have seen at work. The wrongdoing you disclose must be in the public interest which means that it must affect others, for example the general public. As a whistleblower you’re protected by law – you should not be treated unfairly or lose your job  because you ‘blow the whistle’.

You can raise your concern at any time about an incident that happened in the past, is happening now, or you believe will happen in the near future.

What counts as whistle blowing?

For a disclosure to be protected by the law the whistle blower should make it to the right person and in the right way. If an employment tribunal considers that your disclosure was made in bad faith, it has the power to reduce any compensation award by up to 25%.

The whistle blower will generally be protected if they make your claim to their employer or to another person, if they reasonably believe that the relevant failure relates solely or mainly to that person, or if it is a matter for which that person other than their employer has responsibility.

Disclosures about certain types of matters may also be made to specific bodies, such as the relevant regulatory body.

There may be protection for disclosing the issue to another person in exceptional circumstances – such as where the whistle blower reasonably believes that making the disclosure to their employer means that they will be subject to a detriment or that evidence will be concealed or destroyed; the whistle blower has already made the disclosure to their employer; or where the relevant failure is of an exceptionally serious nature. In such cases, the disclosure must not be made for the purposes of personal gain.

In some cases, the whistle blower may bring a case before an employment tribunal, which can award compensation.

Karen Silkwood 1974
Karen Silkwood became the first well known and nuclear plant whistleblower. Her time as a chemical technician at Kerr-McGee nuclear plant led her to speak out about the unsafe work conditions in her workplace. She testified before the United States Atomic Energy Commission in 1974 about the health and safety issues of atomic power plant workers. The jury found that the company contaminated her and her home with plutonium and awarded her a substantial monetary reward. When the case came before the United States Supreme Court, a settlement was reached by Kerr- McGee with Silkwood.

Katharine Gun, 2003
Katharine Gun was a British translator who worked for GCHQ. In 2003, she leaked top secret information to The Observer concerning a request by the United States for compromising intelligence on diplomats from member states of the Security Council who were due to vote on a second United Nations resolution on the prospective 2003 invasion of Iraq.

Gun was charged with an offence under Section One of the Official Secrets Act. The case came to court in 2004 but within half an hour it was dropped because the prosecution declined to offer evidence. In September 2019, Ken MacDonald, the former director of public prosecutions, said that the case against Gun was not dropped to stop the attorney general’s advice on the legality of the Iraq war from being revealed; he said that Gun would not have received a fair trial without the disclosure of information that would have compromised national security.

Dr Aubrey Blumsohn, 2006
While a senior faculty member at Sheffield University, Dr Blumsohn own was part of a joint research project with Procter and Gamble about the company’s drug Actonel . Doctor Blumsohn blew the whistle on data concealment and manipulation performed on behalf of the drug maker when he learned that the company omitted key data from a statistical analysis that they asked him to endorse. Dr Blumsohn’s actions helped to ensure that Procter and Gamble’s osteoporosis medication was well understood and safely used by the medical community in their practices.

Cheryl Eckard, 2010
Eckard blew the whistle on widespread contamination problems at GlaxoSmithKline’s pharmaceutical manufacturing operations. Her case resulted in GSK paying a $750 million settlement with the US government. Eckard received $96million herself for coming forward.

Dr Eric Ben-Artzi, 2012
Dr Ben-Artzi Came forward with evidence of a multibillion dollar securities violation at Deutsch’s bank. As an employee, he discovered and internally reported serious violations stemming from the banks failure to report the value of its credit derivatives portfolio accurately. Ultimately settling the charge for $55million.

Edward Snowden, 2013
Edward is an American whistleblower who copied and leaked highly confidential and classified information from the National Security Agency in 2013 when he was a CIA employee and subcontractor. His disclosures revealed numerous global surveillance programs, many run by the NSA with the cooperation of telecommunications companies and European governments.

Anonymous, 2019
In August 2019 an unnamed CIA officer filed a whistle blowing complaint with the Inspector General of the Intelligence community under provisions of the Intelligence Community Whistleblower Protection Act. In September 2019, the Washington Post broke the story saying the complaint concerned a promise US President Donald Trump made during communication with an unnamed foreign leader. Nancy Pelosi, speaker of the US House of Representatives, announced a formal impeachment inquiry which was widely attributed to the whistleblowers complaint. What became known as the Trump-Ukraine scandal culminated in December 2019 in the impeachment of the President. On 5th of February 2020, the US Senate acquitted Trump of the charges brought against him by the House.

Li Wenliang, 2019
Li was a Chinese ophthalmologist at Wuhan Central Hospital who warned about the COVID-19 pandemic on the 30th of December 2019. On the 3rd of January 2020 Wuhan police summoned and admonished him for “making false comments on the Internet”. Li returned to work but later contracted the virus from an infected patient and died from the infection on the 7th of February 2020.

If you would like to discuss matters further, please do not hesitate to get in touch for confidential and impartial advice.